The Soul of the Oja 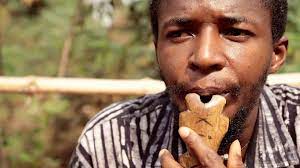 The Soul of the Oja is a documentary project focused on exploring the musical tradition of the oja among the Igbo people of Nigeria. The oja is a traditional wind instrument that has featured prominently in Igbo cultural and social life. Historically, it was used to accompany the masquerade cult and men of the warrior class in battle. It was said to awaken and inspire the spirits. Over time, however, the use of the oja has been largely commercialized and secularized.

The Soul of the Oja documentary will tell the story of the oja and its cultural significance. The film will feature interviews with current music students from Nnamdi Azikiwe University and Ichokwu Academy who are learning the oja’s modern applications as well members of the Igba egwuregwu ensemble community where traditional Oja practice is becoming extinct as the last generation of  seasoned oja players begins to die out. The film will hopefully inspire more Igbo people and the world at large to learn and appreciate this sacred instrument.

This project will be showcased in Boulder upon its completion in Spring 2023. In addition, it will be available for the general public via online platforms like YouTube.  Specific audiences include MAPE (Media and Public Engagement) students and faculty at CU Boulder as well as students of Nnamdi Azikiwe University in Awka, Nigeria.